The ancient bridge at Poissy, shown above, was at times in the past used by the legions of an invading army to provide passage across the Seine.  Sometimes the bridge was destroyed and then later rebuilt by the Parisians. The bridge and this view of the river, which bends beyond the bridge, was a favourite sketch and painting site, frequented by numerous Parisian artists, including Derain, Utrillo, Monet, Pissarro, and Maurice de Vlaminck. The painting which Vlaminck produced here in 1910 was created after he had ceased painting in the flamboyant Fauve style.  From 1904 to 1908  he, along with Matisse and Derain, had used brilliant colours in non-naturalistic ways to produce their striking paintings, such as the two images shown below: 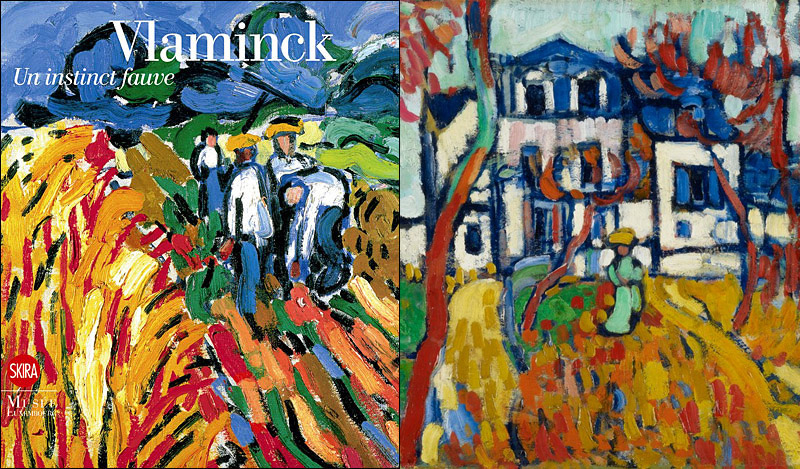 The painting Vlaminck created in 1910, of the river and bridge is, however, restrained in its use of colour, and reminds one more of a Cézanne of the 1890s; it is certainly not an example of a painting from Vlaminck's Fauve period.

This canvas, named simply Le Point de Poissy (60cm x 80cm), was shown in London by Roger Fry in 1910 as part of his exhibition of more than 200 pieces at the Grafton Galleries in Mayfair which he called Manet and the Post Impressionists.

This was the first post-Impressionist exhibition to be mounted in London and in fact was the first in the anglophone world. The exhibition caused an immediate and highly volatile reaction.  An art critic for The Pall Mall Gazette, for example, described the paintings that were shown as being the "output of a lunatic asylum".  Edwardian tastes in art were, at that time, still firmly controlled and delimited by traditional Victorian sensibilities and would not move forward until after the shock waves of seismic disruption had penetrated English society, during and following World War I.

Clive and Vanessa Bell must have studied this painting and considered purchasing it at the time, since four years later in Paris they acquired it from its Parisian art dealer Kahnweiler.

Much later in their marriage they decided to sell the painting, but before doing so, Vanessa made a copy in oil on canvas, which may now be seen in the Charleston Farmhouse in Firle, East Sussex.

Vanessa experimented with a wide variety of styles.  These changed and evolved during her life.  The portrait of  Dora Morris (shown below) seated next to a dresser with her reflection shows Vanessa's ability to convey delicate nuances of personality and subtlety of feeling in a masterly manner.

In the still-life below one may experience a lightness and loveliness of colour in the fruit which can remind one of some of the paintings she made for covers of her sister Virginia Woolf's books, which were printed by the Hogarth Press.

To see a slide show of Vanessa's paintings and watercolours click here.

Posted by Robert Fields at 8:21 PM No comments:

Duncan Grant, who was also a pivotal member of the Bloomsbury Group, devoted his life to art.  He endlessly experimented with various styles of painting throughout his life and he was actively painting up to the time of his death at age 93.

Born in Scotland in 1885, he was the son of a British Army officer.  The first 8 years of his life were spent with his father in India and Burma before he returned to England to attend one of the premier schools vested with educating children of the wealthy and privileged of Victorian England, the Rugby School.  There he met Rupert Brooke and there he also became interested in art, subsequently enrolling in Westminster School of Art. After this he attended Jacques-Emile Blanche's La Palette in Paris in 1906 at the age of 21.

While in Paris he copied Jean-Baptiste-Siméon Chardin’s famous 18th Century still-life paintings in the Louvre, apparently unaware of Matisse and Derain’s flamboyant pieces which would come to be known as les Fauves art, which were being shown in private galleries in Paris at this time.

On the personal and private side, however, we do know that after  returning to London, Grant began having an intimate sexual relationship with his first cousin Lytton Strachey, an active member and one of the founders of the Bloomsbury Group.  Grant would also become involved in a long-term romantic relationship with John Maynard Keynes, the Provost of King's College Cambridge, economic adviser to the Crown,  and also one of the founding members of the Bloomsbury Group.

In 1910 Grant's work was exhibited at the Grafton Galleries in London and two years later he traveled abroad with Roger Fry to help select French and Russian paintings for their London exhibition which was entitled British, French and Russian Artists.

This was a dazzling and groundbreaking exhibition at the time for it included works by Picasso, Matisse, Cézanne, Kandinsky, as well as by Grant and Fry.

In 1913 Grant joined with Roger Fry and Vanessa Bell to form the experimental craft and furniture shop they named the Omega  Workshops.  It was at this time, when working closely together on a variety of projects that  Duncan and Vanessa may have discovered they were able to work well together and would then began what would end up being a lifelong partnership.

Grant would afterwards move into Vanessa’s home with her two young sons, Julian and Quentin, and become an integral member of the household.  Five years later Vanessa became pregnant and then give birth to Grant's child whom they named Angelica.

During this time Vanessa remained married to her husband, Clive Bell and her relationship with Grant was not hidden from him.  The three often lived together in Charleston at the same time, and Bell was agreeable in allowing the birth of Vanessa's child, Angelica, to be registered as being his own child, having the Bell family name thereby conferring on her the financial and social rights which otherwise she would not have had.

Duncan Grant and Vanessa Bell often painted together at home in their Charleston studio and they were also able to travel and paint together in many villages in the countryside of France, Italy, and Spain.

Grant's subjects varied from still life interior arrangements to rustic outdoor scenes.  After his death he would receive critical acclaim for his paintings and for his contributions to early 20th Century English Post-impressionistic painting.

Below is an abstract rendering of rooms in Vanessa's home in Gordon Square which he painted.

This geometric rendering contrasts significantly with the portrait of his daughter, Angelica, which he painted much later in 1940, when Angelica was 22 years old.

Duncan and Vanessa both enjoyed decorating the rooms of the houses in which they lived, as may be seen in many photographs and paintings, two of which are shown below.

The photo below is of a room that Vanessa and Duncan used as their atelier in Charleston.

Below is an oil painting made by Duncan of another room in Charleston, which shows a great difference in painting style from that used with the rooms he painted in Gordon Square.

After the death of Vanessa, Grant continued to live and paint by himself in Charleston.  Later he moved out to live with Paul Roche,  a former male model of his and Vanessa’s.  He died of bronchial pneumonia in Paul Roche's home in May 1978.

To see a slide show of Grant's paintings, click here.

Posted by Robert Fields at 10:05 PM No comments: